Last week Tyto celebrated its fourth anniversary. At launch PR Week seized upon the innovative nature of our remote model as covered here. The pandemic has shone a light on the benefits offered by remote models and accelerated their adoption. Today, PRovoke and PRmoment report on a new study commissioned by Tyto that shows remote working is destined to become the new normality with majority of UK PR agency CEOs (54%) believing over half of roles will be filled by remote workers. We’ll go into the findings of the study in a minute.

Tyto’s ‘location agnostic’ remote model was a deliberate move to be a more inclusive employer by removing the location hurdle in hiring. It was also central to our mission to reinvent the European PR agency model by allowing us to build a close-knit team that works as one across European borders. We call this PRWithoutBorders™. As we gear up to celebrate our anniversary, we are also celebrating how the wider PR industry is following in Tyto’s footprints and embracing remote working.

The research we have released today conducted in partnership with the Pulse Business*, shows that almost a third (27%) of UK agency CEOs expect over three quarters of roles to be filled by remote workers. One in three CEOs (33%) believe more than 25% of roles could be filled by overseas workers. The vast majority of agency CEOs (83%) expect a decentralisation of the UK PR industry away from London.

The study illustrates how remote working is sparking a transformation of the UK PR industry away from one dominant hub in London, breaking down regional borders to catalyse a more inclusive working environment. With this I believe we are witnessing the start of the greatest shift in staffing models the PR industry has experienced in the past fifty years.

Remote work is transforming the agency landscape by opening new possibilities for agencies, employees and clients. Agencies can now draw talent from across the globe, employees can choose where to live without compromising their career ambitions, and the conditions are being created for us to build a far more inclusive industry. This in turn is creating the conditions for exciting new client service models that bring clients closer to their target audiences than ever before.

We built our operating model around remote working and now are established as the European PR agency at the heart of the remote economy. Tyto’s own team is drawn together from five countries and over 30 different towns and cities. Over 90% of PR Week’s top 150 firms are clustered in London, whereas only 10% of Tyto’s team is located in the capital and 60% of its team is located outside of the UK. 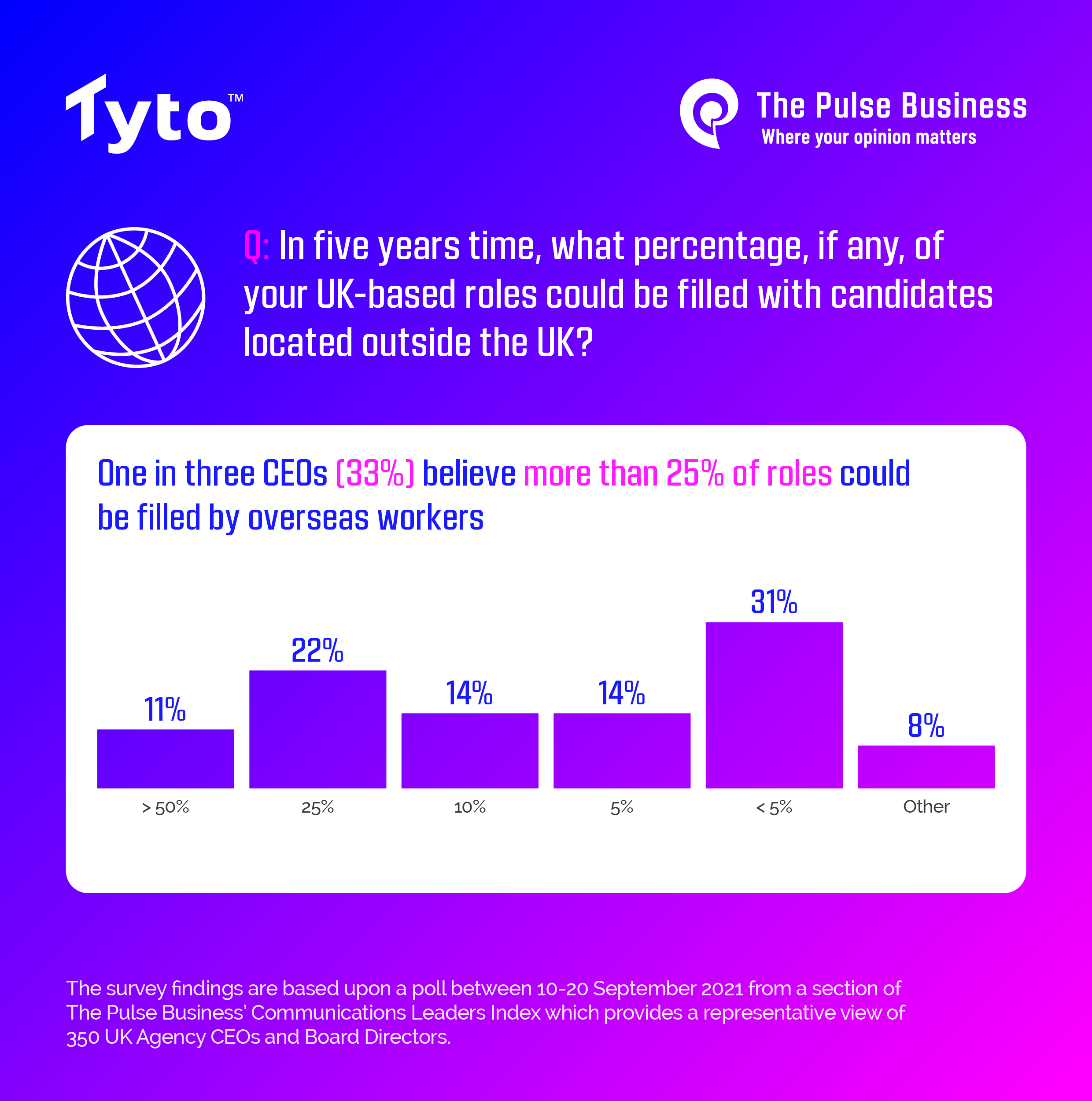 Reimagining the agency model in a remote-first world

Remote working is not just changing working patterns it is also enabling the creation of new agency business models. Through our PRWithoutBorders™ model for European PR we’ve found that we are able to remove inefficiencies and siloed working to deliver clients 30% more value from the same investment. We’ve also found that we are able to tap into new talent pools overseas allowing us to build a digital media hub in Spain where there’s a real depth of digital talent.

Remote working is also enabling employees to reimagine their entire lifestyles. London house prices, Brexit, the need to raise a family, and the prospect of a better quality of life overseas, alongside new digital nomad visas in the likes of Spain and Portugal are emboldening employees to leave the capital on mass as well as move abroad. Several of Tyto’s team have said goodbye to London for a better life over the past two years, with a number even leaving the UK altogether.

The boom in remote work is not only changing working patterns it has also fuelled billions of dollars of investment in new technologies and tools which is creating a business opportunity for UK agencies. This is having a knock-on impact on agency revenues with one in three CEOs (31%) saying that the remote economy has driven at least 25% of revenues over the past 12 months, and 14% of CEOs reporting it has driven more than 50% of revenues. Tyto has seen its own revenues grow by over 50% in the past year having won several clients that are supporting the remote economy including Remote and Wire.

What started as a temporary adjustment to life in a pandemic economy, has changed the outlook of agency leaders and suggests that over the next five years we will see a decentralisation of the agency business. Agencies that are well positioned to seize the hiring and growth opportunities from the remote economy will be sure to prosper as the world has changed now and the old ways of office-based working models are soon to be a thing of the past.

You can download the infographic with the survey results here.

And while you are here, have you ever wondered what are the significant – and often unnecessary – financial and time costs resulting from commuting? What if I told you that the average London commuter spends more than 21% of their salary per year on commuting expenses? Have a look at our ‘Cost of a London Commute’ study here.

*The survey findings are based upon a poll between 10-20 September 2021 from a section of The Pulse Business’ Communications Leaders Index which provides a representative view of 350 UK Agency CEOs and Board Directors.

Why success with German media is a question of patience and empathy
My first month interning at a location-agnostic PR agency
My location-agnostic PR agency life | Luke Graham
RSF Embracing Perfect Partnership: Why we’ve launched the Tyto Foundation
How the Remote Economy is shaping the future of the agency model
Why Europe faces a global war for talent
How do you build cultural cohesion in fully remote teams?
The best of both worlds: How I bring my work as PR consultant and editor together
International Translation Day: Three questions on translation for our Tunisian...

The culture secrets of unicorn startup CEOs
Scroll to top