Fintech is the largest, most influential sub-sector of technology in the UK. This is according to our Tyto Tech 500 Power List that we launched late last year.

This is perhaps no surprise given the UK’s rich heritage in the worlds of banking and finance, but its dominance shows when compared to the other sectors on our list.

Of the top 500 influencers, 74 are in Fintech. The next largest category is Madtech (marketing and advertising technology) with 42 influencers, followed by AI with 32. 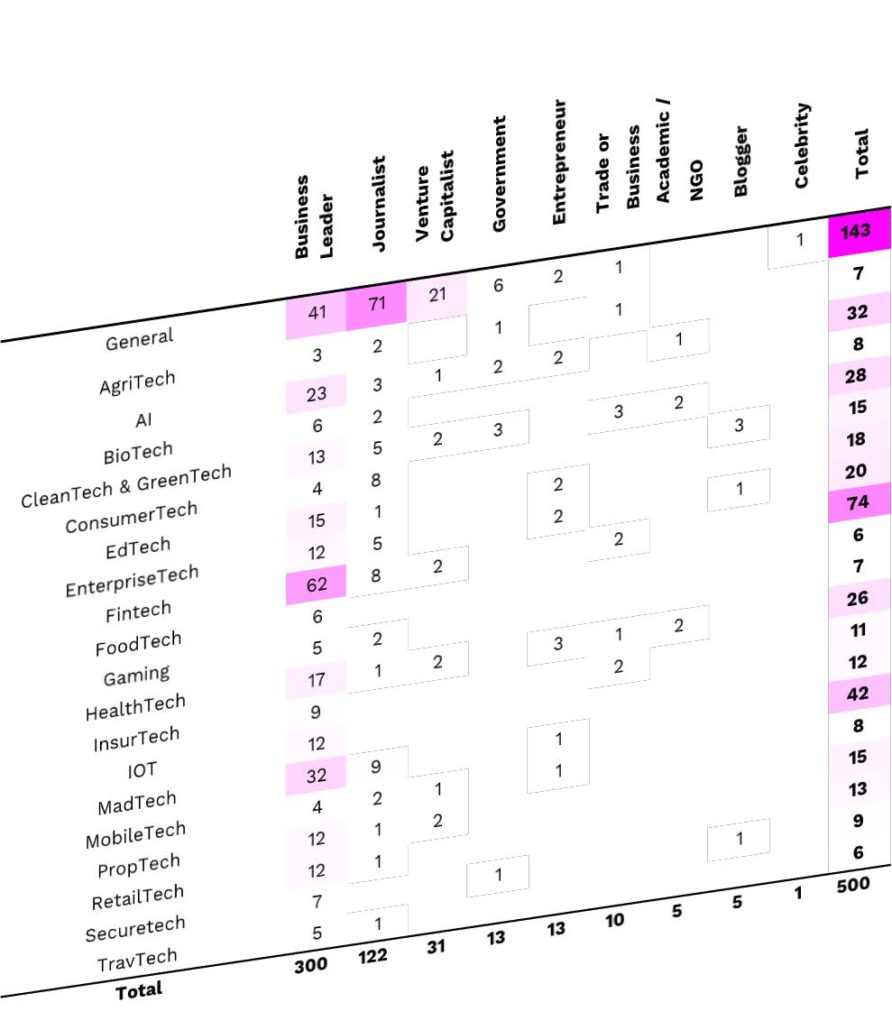 The Tyto Tech 500 Power List was created using a proprietary methodology that combined influencers’ media activity, social media reach, conference participation and owned platforms to create a ranking. Influence is more than just LinkedIn followers, and we were genuinely curious to learn who had the most impact both online and off. What the Fintech influencers share, then, is influence in the roundest sense of the word.

Also striking in the list is the low amount of women. Only three of the Fintech top ten are women, and there are only 15 in the top 50. This presents an opportunity, as there are many, many women out there doing great things in Fintech (such as Anne Boden of Starling Bank, the first woman in the Tyto Fintech Power 10). The next step is for more women to start championing the work they do.

Something else that struck us was the lack of journalists on the list. We categorised the entrants as either business leaders, journalists, VCs or members of trade associations. From 74 Fintech influencers, only two were journalists. Given the rapid growth of this sector, it’s not surprising the vast majority of the sector’s most influential people are business leaders, but it certainly raises some interesting questions about what that means for Fintech PR and media relations.

That’s something I’ll be looking into in more detail shortly, but for now – and drum roll please – let us reveal who are the top ten most influential people in Fintech today or, as we’re calling them, the Tyto Fintech Power 10.

Tyto’s financial services and fintech practice offers breadth and depth of sector expertise. The team has worked with small start-ups, industry stalwarts and everything in between. Find out more.