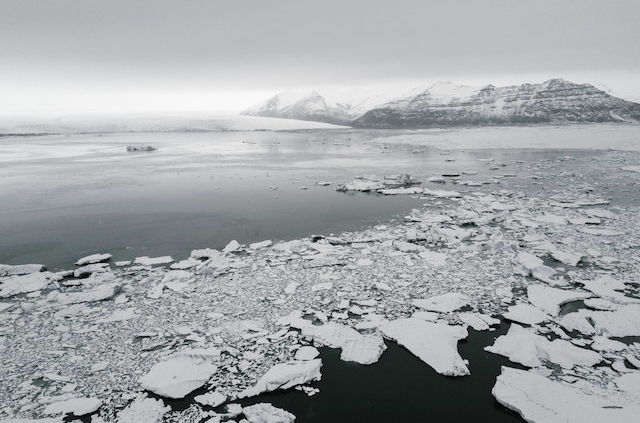 It’s been three months since we launched our Tyto Relevance Index, a new insights service using social media data to track major technology and socio-economic topics, as discussed by Europe’s technology community. This means we have a full quarter’s worth of data to unpick and to begin looking for any patterns that may be emerging.

It’s worth pointing out that we expect several topics to consistently feature at the top, or among the top, of all topics we track – for example AI & Machine Learning was the top tech topic in each of the last three months across Europe as a whole, as was Climate change in the socio-economic category.

While this is interesting, it can only tell us so much. Taking stock of the data every quarter gives us the chance to dig a little deeper and identify the most notable changes taking place, how they vary from country to country, and whether we see the signs of a trend in the making.

With that in mind, let’s a take a closer look at the top topics dominating social media conversation among the European tech community. In the technology category, four topics account for 6 out of 10 social posts (62%) across France, Germany and the UK. As mentioned, AI & Machine Learning is chief among them at 25%, followed by Data economy (15.8%), Cybersecurity (10.6%) and Virtualisation (10.5%).

The share of conversation on AI & ML has increased month-on-month, further solidifying itself as the biggest tech topic in Europe. It held a 23.4% share of conversation in October, rising to 28.6% in December. It has been hard to ignore the highly consequential progress being made – and related concerns and controversies – by the likes of ChatGPT and several AI art engines. Conversation around the role, impact and ethics of AI in our lives is only getting bigger. 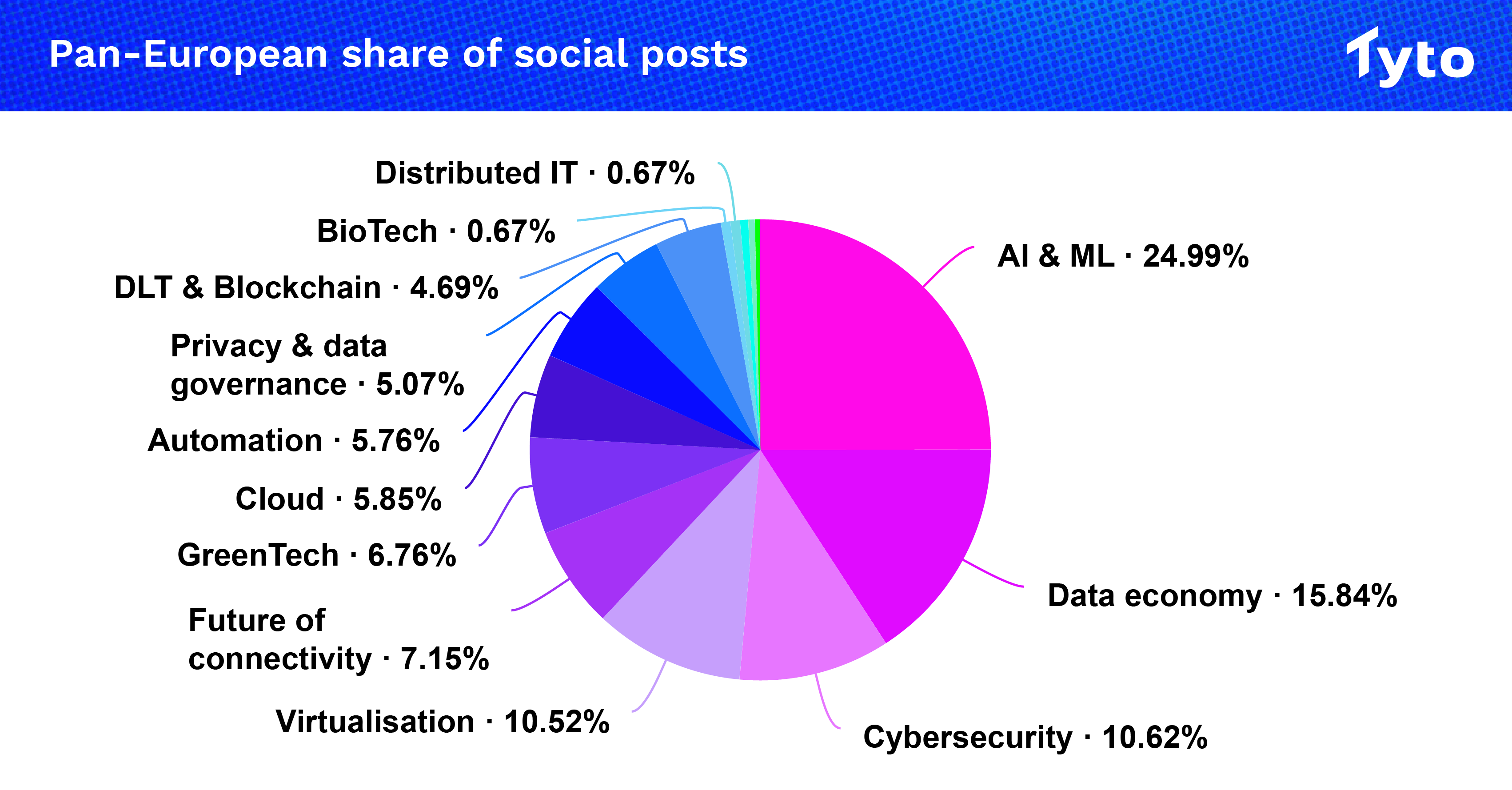 The three most relevant socioeconomic issues discussed among European tech influencers were Climate change (19%), Geopolitical conflict and instability (15.1%) and Health risks (10.3%), with Crypto (9.2%) and Transportation (9%) not far behind. Climate change was the top topic of discussion every month, with a peak share of conversation in November (22.2%), and similarly, Geopolitical conflict and instability occupied second place each month.

We can see interesting differences in relevance between France, Germany and the UK when it comes to the big four technology topics. AI & ML completely dominates the social media conversation among French tech influencers, accounting for three out of ten posts (32%). This is 90% higher than in the UK and 36% higher than in Germany. What’s more, a highly related topic like Automation also ranks fourth with 7.8% of the online conversation in France.

In Germany, a highly relevant topic this quarter was Future of connectivity with 10.3% of the conversation, taking fourth position. DLT & Blockchain was also highly relevant in fifth place with 8.4% of the conversation. However, both of these topics have become less significant as the quarter has progressed, with Future of connectivity dropping to seventh place, and DLT & Blockchain dropping to tenth, in December.

The dominant topic among UK tech influencers is not AI & ML but cybersecurity. It held 21.7% of the conversation in the UK and was discussed four times more than in France and Germany. In France, it was the seventh most talked about tech topic with 5.5% of the conversation. And it was even less relevant in Germany, where it was the ninth most talked about tech topic with only 5.1% of the social media conversation.

There are more differences between the countries when looking beyond the top two as well. For example, Crypto was a far less relevant topic in the UK than in the other two countries (where it ranks seventh with 7.6%). The volume of social posts on this topic was 35% lower than in France and 27% less than in Germany.

Although Geopolitical conflict and instability (16.5%) was the second most relevant issue in Germany, it has been losing relevance as the quarter has progressed. It was the top topic in October, second in November and third in December. In contrast, the topic remained number 1 for each month in France. 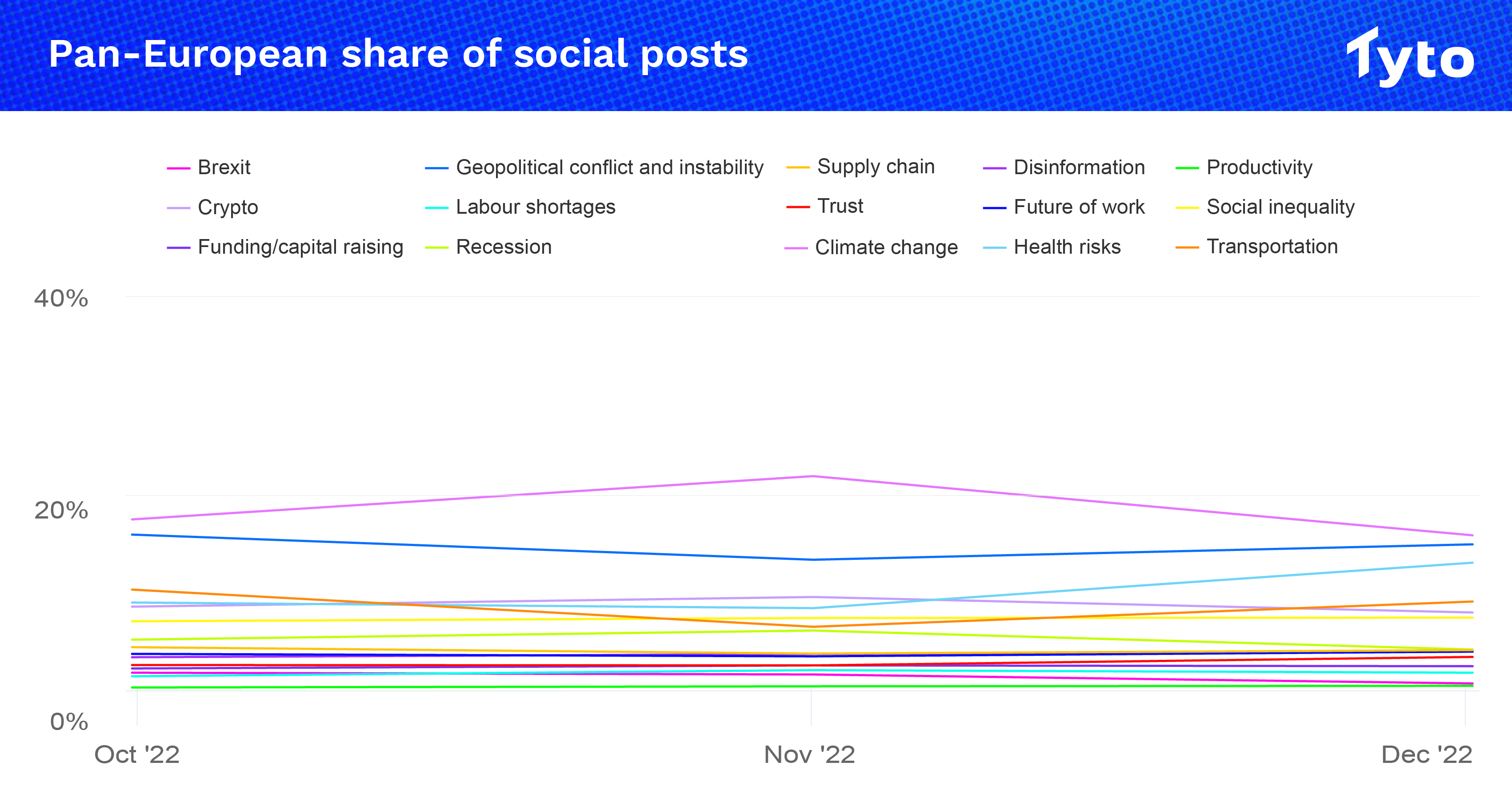 Across Europe as a whole, only six technology and socioeconomic topics increased their share of conversation each month over the quarter. The biggest gains were seen by AI & ML, which grew only slightly by 0.02% from October to November but by a huge 5.23% from November to December.

Despite the small gains made, the fact that only six topics out of 30 grew their share of conversation month-on-month could be worth keeping an eye on.

As I said at the beginning, these are the results of our data-powered insights service after its first three months of operation. If you want to dig deeper into the data, you can access the Tyto Relevance Index here. By subscribing (it’s free!) you will be able to view the data and receive our monthly newsletter with the previous month’s highlights in your inbox. If, like me, you believe that data should inform your communications campaigns, the Tyto Relevance Index is a great tool to find out what topics are dominating the social media conversation of hundreds of tech personalities in Europe. I encourage you to give it a try and let me know what you think. 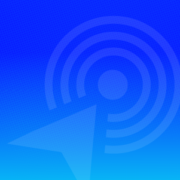