The global situation as we know it has changed considerably in recent years. From the COVID-19 pandemic to the climate crisis and Russia’s invasion of Ukraine, followed by record-breaking inflation to a practically global forecasted slowdown in economic growth, each of these major events have provoked great instability around the world.

Against this backdrop of economic and political unease, we have seen how the world today is more connected than ever, a crystal-clear reality that is getting sharper day-by-day. The diversity of communication channels and access to a wide array of information enables citizens to make more informed decisions. This process of adapting to a new flow of information has also led to the emergence of key relevant players, and these are the ones analysed in the following sections.

We recently launched the sixth edition of the Tyto Tech 500, our proprietary research and ranking of the most influential individuals in technology in the UK, Germany and France. Our 2022 Tyto Tech 500 shows how, in times of uncertainty, official institutions and their representatives, as well as impartial and unbiased sources, gain significance. This year, as we saw in 2021, there has been a significant growth in the number of academics. Following on from last year, this influencer group has grown by 25%.

There were 39 academics ranked in our 2020 edition of the Tyto Tech 500, 68 in 2021 and this year these have increased to 85. It bears relevance to mention that this figure more than doubles the number we identified in 2020 and represents a +118% growth. Similarly, government influencers have grown by +11% this year. These have also seen a 75% increase in numbers in just two years going from 28 Government influencers in 2020 to 44 in 2021 and 49 in 2022, and we believe this is not a coincidence, as we have explained in this blogpost.

Our report shows academics have seen the biggest growth in absolute figures in 2022, with 17 new influencers entering the Tyto Tech 500. It is also important to note that academics and government influencers are ranked 4th and 5th respectively by influencer type. That means 9% of the people in the Tyto Tech 500 rankings across the United Kingdom, France and Germany belong to one of these two groups.

For the second year in a row, this upward trend carries over into the pan-European Tyto Tech 500. Government influencers ranked third with 8% of the total of influencers, closely followed by academics in fourth place with 7% of the total. The percentage of influencers belonging to these categories rose to 15%, up from 14% last year, which again shows the relevance of these groups that occupy highly-prominent positions, either analysing them by individual countries or combined across all three.

Looking at the top 100 positions at pan-European level, 32% of influencers ranked are either members of governmental organisations or leading academics (up from 30% last year). This figure increases to 40% when we look at this year’s top 25 of the pan-European Tyto Tech 500 (in this case, down from 52% last year). 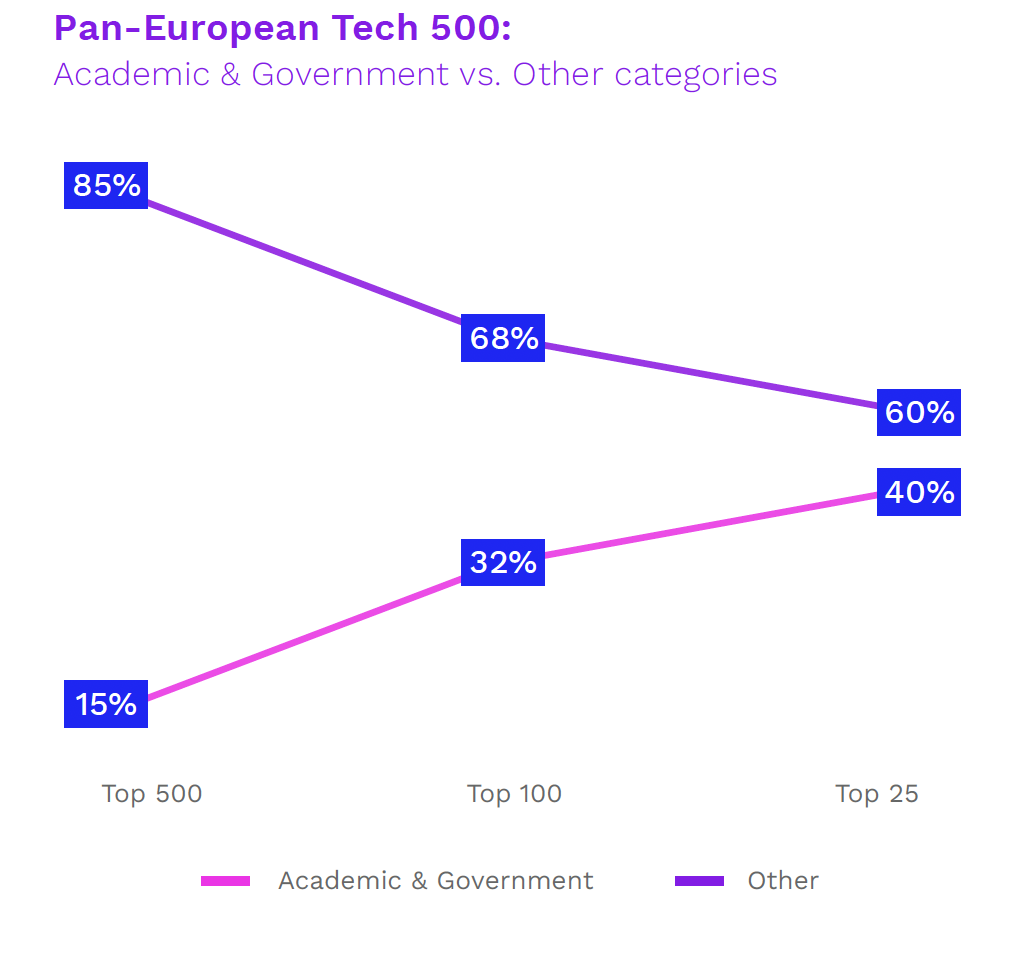 Academia and institutions have a mission to accomplish

As highlighted above, we believe this significant rise in the number of academics and government officials over the last two years is related to the current climate of insecurity and misinformation, where the public seeks objective, unbiased sources of information. It is at times like these that the influence of these professionals gains ground and highlights their relevance and value to media.

The world is constantly undergoing profound and unpredictable changes. The pandemic, the war, climate change, and the advent of digital and virtual ecosystems, both socially and in the labour market, have given us a valuable lesson. Institutions, governments and their stakeholders must consider this crucial role they have in informing, representing and liaising with the general population. A clear mission for the future must be to increase their resilience, especially considering the great importance they have in communicating new realities, in the context of science, health and safety, to citizens all around the world.

Top 10 Academic and Government influencers in the Tyto Tech 500

Tyto launches 2022 Tyto Tech 500 influencer report
Tyto Tech 500: Who had the greatest influence during the pandemic?

Do events really provide a good opportunity for PR?
Scroll to top