The cat might also be alive for all we know, but it is most certainly not both at the same time. Checking on the state of a cat will make it purr, snarl, ask for food (most likely) – but it will not affect its wellbeing in any way. Let’s be honest: Schrödinger’s analogy* is useless for anyone new to the subject, trying to understand basic quantum effects – yet it is the most widely used in media today. A revolutionary technology that will affect everything and everyone – but no satisfactory way to describe even the most basic concepts of it? Let’s change that, together. Let’s make this World Quantum Day (April 14) the day we retire the cat and give rise to new analogies that will help everyone understand the concepts of superposition and entanglement! 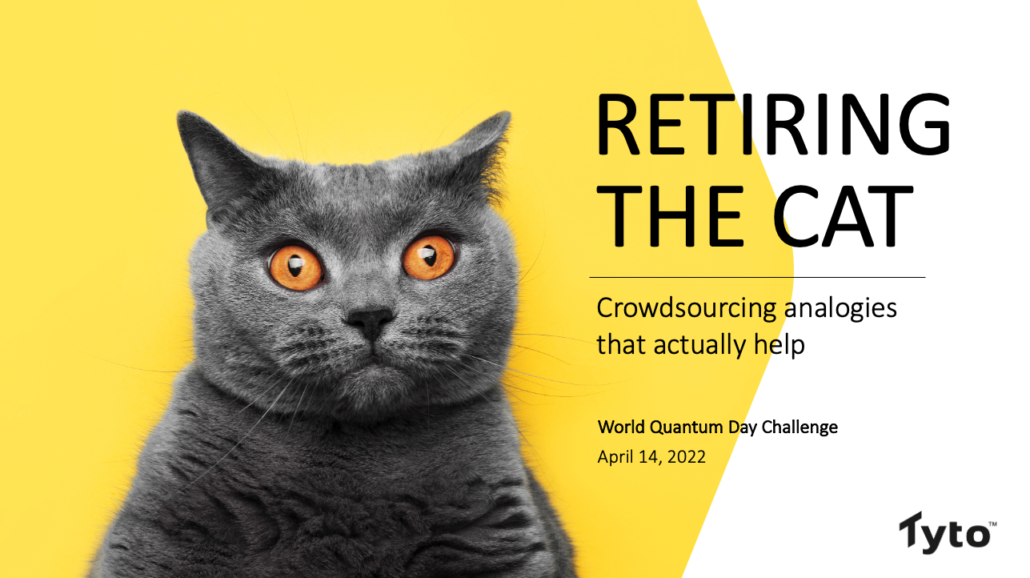 For me as a tech PR professional, quantum computing is one of the most exciting areas of innovation today. While the technology itself is very young – we still need to figure out what makes the ideal qubit, which architectures will scale, how to minimise errors and how to effectively write code that will be able to exploit the full potential of quantum computers – the public eye has started following each milestone the industry makes. The impact quantum computing will have on the world will be huge, and people want to understand the things that change their lives.

Now is also a good time for business leaders to familiarise themselves with quantum computing. Supercomputing centres in Europe are adding early quantum computers (e.g. a D-Wave annealer in Jülich, an IQM machine in Munich or an IBM Q System One by Stuttgart – living in Germany, I mostly follow local developments) and will make computing time available to enterprises, who have started setting up quantum teams in their innovation units. The race is on: the US, China and Europe are all competing (and collaborating) to develop larger-scale quantum computers beyond the 50-100 qubits that are possible today.

However, the really hard challenge is learning about the topic. Any “idiot’s guide to quantum computing” has mathematical formulas on page 2 (quantum mechanical states are best described using Dirac bra-ket notations, and this is where it already gets difficult for me, and when matrix or linear algebra joins in a page or two later, it does not help me very much), and common sense does not help with getting one’s head around basic concepts such as “superposition”, “observation” or “measurement” and “entanglement” either.

Analogies are the best option the broad public has, but there aren’t any good ones out there. The cat and the spinning coin (which supposedly has multiple states at once while spinning) are the ones journalists are using in every single article today to tackle the “multiple states at once” paradox. As far as I know, no one has tried to come up with an analogy to describe quantum entanglement.

The question is: Can we do better, together? I guess we’ll find out!

For World Quantum Day, Tyto is calling to any quantum specialist or newcomer to propose new analogies that really help everyone to understand the three basic quantum concepts:

A pan-European Tyto jury will evaluate all contributions made until *** EXTENDED DEADLINE *** May 31, 20 GMT ***EXTENDED DEADLINE***, and select the one in each category that helped every member of the jury to “finally, really get it”. The winners will be honoured by becoming part of the analogy’s name, and Tyto promoting it wherever we can. You will be replacing “Schrödinger’s Cat”, and your name will live on as “Winner’s Pumpkin” or “Winner’s Screwdriver” (should pumpkins or screwdrivers happen to form part of your winning analogy, which we can’t rule out at this stage). We will either announce the winners in our blog in June, or announce that we will need to continue the quest. Please submit your analogies to retirethecat@tytopr.com, and add the name you will want the analogy to be known as. By sending us an analogy, you agree that we can publish and use it for the greater good of quantum computing advancement.

Why are we doing this? Tyto is a European PR agency focused on the colliding worlds of technology, science and innovation. We are very curious people, and always strive to stay up to speed with all things tech. This curiosity led to us joining the European Quantum Industry Consortium (QuIC aims to foster the EU quantum ecosystem, here’s a great Forbes article about it) about one year ago as an associate member. Since then, we have created something like an early-stage quantum computing competence centre. We are supporting Photonics21, a European tech platform representing more than 3.000 member companies that aims to establish Europe as a leader in the development and deployment of photonics technologies, and which provides enabling technology for quantum computers, Classiq, a company that specialises in quantum computing algorithms as well as a quantum computer manufacturer. All mandates are still quite new, and we are growing and learning as we help our clients communicate their amazing contributions to the world of quantum computing.

*Schrödinger’s Cat is a thought experiment where a cat, a radioactive substance and a Geiger counter are all placed in the same box. The substance’s chance to decay and emit a particle is 50:50, and if it does, the Geiger counter smashes a flask of poison, killing the cat. The chance that the cat is dead is 50:50, so the cat is “dead and alive” at the same time. This thought experiment is used in many articles as an analogy to describe superposition, i.e. a qubit having multiple states at once. Of course, large-scale systems don’t just behave like quantum systems, so the analogy does not help anyone understand superposition any better. The Austrian physicist Erwin Schrödinger, as far as our research goes, did not intend for the cat to become an analogy to describe superposition in the first place. On the contrary, he wanted to showcase how absurd this quantum property was when translated to the “real” world. So the good news is, his ghost will not haunt us if we retire the cat — on the contrary, he may finally rest in peace!

How do you build cultural cohesion in fully remote teams?
Scroll to top